At my previous employer I “just” was a lowly receptionist, whose only job was to answer phones and greet visitors, until one day when I met my “worst nightmare”.

My nightmare wasn’t a person, it was a task, and I want to tell what I learned from conquering that task and how it helped make me into who I am today.

My boss employed a business coach – the first time I had ever heard the term. I was surprised because I just assumed that business owners knew what they were doing, and if there were tasks they couldn’t, or didn’t want to do, they employed managers. 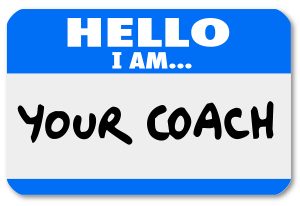 A namtag sticker with the words Hello I Am Your Coach to represent your life advisor, mentor, manager, leader or other person offering moral support or help

What our business coach was engaged for was to help introduce more accountability, boost sales, and make sure we utilized our talents as well as time to the fullest. So what did that mean for me? The coach told me that my job was now to also include Accounts Receivable collections. I was horrified, and when he told me my new role I angrily blurted out “No, I won’t do it!”. I was scared. I even cried! I said that if they made me do it I would quit. I was beyond emotional.

The next day I hoped they would forget and the “problem” would disappear, but I got a script and some training on how A/R worked. The coach and my boss both worked with me for a week, preparing me for what was to come. Finally I was beginning to get comfortable with the idea, but the fear of picking up the phone and making the first call was almost overwhelming. It was suggested to me that I start off with an easy account, just to get comfortable with the process, but I actually surprised myself by saying “No. What’s the most difficult account?” I thought that if I could crack that one, then everything would be downhill from there.

With sweaty palms and a lump in my throat, I sat down to make my first call.I didn’t know what to expect, but I automatically thought the worst. I was sure I was either about to get shot down, be yelled at or make a mistake. But, to my amazement, it was really easy and I actually collected a large, overdue invoice on the first phone call. It WAS a downhill ride from there on out.

Of course, at times I encountered some difficult clients, who really didn’t want to pay, but I stuck it out and did it.

My anxiety went away, and I even began to enjoy the challenge of collecting overdue payments. In under two months I collected over about $80,000, some of which my boss thought he’d never see. I actually fell in love with the role.

Looking back on how this all started, I cringe with embarrassment at how I behaved. A task I believed I could not handle and was definitely fearful of taking on, eventually gave me confidence, purpose and growth, AND it really helped boost our company’s efficiency.

I thought I’d take my personal example to see how it might be applied to business in general?

The first thing I had to get over was being challenged to do something I didn’t want to do. How do you cope with challenges like these – do you face them head on, or do you run away?

So, are you coachable? How do you feel about taking advice from someone outside your company? Do you have a coach? Or maybe you don’t believe you need a coach?

Here are some useful tips regarding the coaching relationship:

And remember it’s okay to have a coach, because engaging a coach isn’t a sign of weakness, it’s a sign of strength.

Tiger Woods had a swing coach; Celine Dion has a voice coach; even Tom Cruise has an acting coach. So why shouldn’t successful business owners also have a coach?

Remember, it was a coach that helped me move from listening, to fixing, to growing in business because I became coachable. Because I was open to learning, and making changes, I also gave myself many new opportunities.

If you have any issues, challenges or opportunities in your business that would benefit from being shared with experienced advisors, please don’t hesitate to give Jager Consulting a call on (440) 385-6737.