32 years ago, I moved from Croatia to the great state of Ohio. At the time, Croatia was part of communist Yugoslavia. Growing up in a socialist regime, I experienced suppression and a lack of religious freedom – if Christmas fell during the week, then schools, stores, and factories would still go on just like it was any other day. There was no free speech and a huge “fear” amongst both the young and old, which led to many of us dreaming of better futures and the freedom to express ourselves. Under communism, even the act of displaying the Croatian flag was an offence punishable with time in prison. The Croatian flag is red, white and blue, just like the American flag, and in the middle is a coat of arms, with five shields that represent the five historical regions of Croatia. But during Communism’s regime, that beautiful coat of arms was replaced with a single, red Communist star. 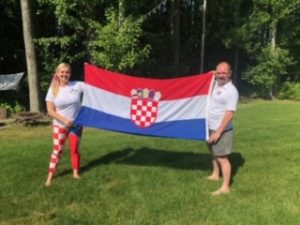 When I was around seven years old, one night my Dad asked me if I would like to see the true Croatian flag. I didn’t understand what he was saying, because the only flag I knew was the one with the communist star, and I was proud of it as a child. My dad explained that he had a flag purchased in Germany and it was the true Croatian flag. He went to the far corner of our home and came back with a shopping bag. He cautioned me not to tell anyone what he had, because if our neighbors, friends, or even some relatives knew it was in the house, he could be locked up in jail. Dad and Mom took out and unrolled the prettiest Croatian flag that I had ever seen. My parents were teary-eyed and so proud to share it with me. I grew up that day and recognized just what an important part the flag plays in who I am. Today, Croatia is once again a democratic country and proudly displays my father’s flag. They no longer live in fear.

When I was a young girl and my Mom took me to stores or to do errands, she would get annoyed because I was too friendly. I wanted to talk to all the salespeople and clerks in the store. The problem was that in my culture, you do not make eye contact with strangers or carry on a conversation with a checkout employee. If you do, you’re likely to be seen as mentally challenged. I was expected to say “hi” when I walked in, do my business, and say bye as I left. No more, no less. It was something I struggled with  during my years there.

Everything changed on January 13, 1989. That was the day I came to America. My first grocery experience was at Giant Eagle in Amherst, and let me tell you, that was one of my happiest days on Earth. The lady at the checkout made eye contact and asked me, “How are you doing?” At that moment, I knew I was home! From that day forward, I have absolutely loved my shopping and out of home experiences. If I meet you in a grocery store, church, bar, or restaurant, we will be friends.

After living here in the USA for three years, I became an American citizen, and let me tell you, for me it was like I was born again. This country and its people are the best in the world, and I am a part of it. In the US you can act, speak, or think as you want without hindrance and without fear. We can protest, choose government officials, and vote for the president of our choice. Unlike China, Cuba, North Korea, or Vietnam – where there is totalitarianism, political repression, restriction of human rights, and government ownership of companies and property – America is the opposite. Here, WE have a liberal democracy and capitalism, which means that anyone who works hard and has a bit of luck can make their “American Dream” come true. 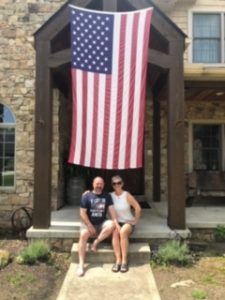 As our country is currently going through these difficult times, we need to remember that – because of our diversity, our history, and our determination – we are not going to allow this country to go backwards. We are going to embrace our differences and become stronger than ever before and continue to be a shining example for others. Today, as we celebrate this nation’s 244th birthday, my family and I, along with many other Americans, will proudly fly the Stars and Stripes above our porch.