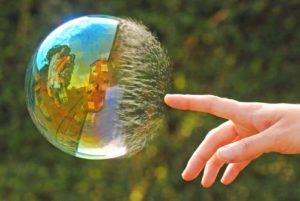 For years, the cultural rulebook clearly stated that middle-class meant owning your own home and that your children must go to college. Out of that consensus emerged a complex system of tax breaks and special lending deals designed to make sure that the number of Americans who bought houses and bachelor’s degrees was as high as possible–or maybe more so.

Bubbles arise in nature when some sort of film, bolstered by surface tension, contains a pocket of air under greater pressure than the general atmosphere. Bubbles arise in markets when some factor external to the market (usually tax engineering or a regulatory mandate) creates a pocket of concentrated capital in which asset prices rise well above levels that can be justified by the assets’ underlying value.

Higher education shows every reasonable sign of having a completely unrealistic, astronomical price tag. The financial data makes a college education tougher and tougher to defend, as an investment in ones future. If we were to follow the lead of college marketing departments and treat tuition as an investment, what price-earnings ratio–or P/E–would we assign to it? Unlike a traditional stock, both the price and the earnings are fairly opaque (a warning signal in and of itself), but let’s make some ballpark assumptions. A typical private school charges about $25,000 per year; the typical public school about half to a quarter of that, depending on residence.

On average it takes six years to finish college nowadays. So, hard cost for a college degree is roughly $150,000 for a private school and a little less than $50,000 for public (depending on residency discounts).

Then what’s the E? It should not be total earnings, because non-college grads can still earn. The E is the difference in earnings the young person will earn, having gone to college, and the amount that she would have earned had she not gone.

Richard Vedder, probably the leading expert on the economics of higher education, told me he believes roughly two-thirds of that earning advantage comes from the character and intelligence of the earner herself, and not what she bought from school. Let’s generously and roundly assign the initial E from college a value of $2,000.

Voilá, our P/E is 100. Is that a good deal? Not really. Even if one argues that the difference, the College E, grows over time, so what? So do stock earnings. If you think that the E grows quickly over time, then you can think of a degree as a growth stock and compare a 100 P/E to that. It still doesn’t look very attractive.

And let’s keep something very important in mind: A college education contains a risk factor that no stock or bond does: zero liquidity. For good or for ill, you’re stuck with it. You can sell a security back to the market, but you can’t sell your degree back. Every college in the country hangs out the same invisible sign: No Refunds.

If you have concerns about the cost of a college education and want to know where to find the best scholarships or just want advice on which college is the best fit for your child, I advise you to contact Kelly MacLean of College Recruiting Specialists on 440-847-8147 or . I used her for both of my children and she’s great. The earlier in high school you engage her the better!