When life gives you lemons…

“When life gives you lemons, make lemonade” is a phrase often used to encourage optimism and a positive attitude in the face of misfortune or adversity. But what if you don’t even like lemonade? Or what if the lemons were not “given” to you, but projected towards you at you at full pelt? My moment of adversity came in the form of a massive personal tragedy.  I lost my previous husband, George, in a freak industrial accident. Nothing, absolutely nothing, can prepare you for that phone call telling you that your spouse is in a serious condition and that you need to get to the hospital right away. 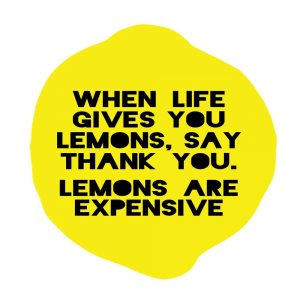 By the time I got to the hospital George had already slipped away and in that split second I lost my husband, my friend and the father of my unborn child – oh, did I fail to mention I was five months pregnant with our son, Marco – as well as having a daughter, Mia who was 12 at the time.  All the dreams we had together, were gone and I had no idea what to do next.

I didn’t sleep at all for the next five days and for the following weeks I was in such deep shock that I felt like I was living in nightmare. The next two years were a haze and I just floated through life without direction. My friends and family didn’t even know how to help, although they were “there” for me. For awhile I stopped my college course and gave up work so I could look after the two children. How are you expected to pick up the pieces and move forward when a tragedy like this happens? What happens when you make a mistake in your personal life or in the workplace? How do you cope when you get laid off ? What do you do first? How do you move forward? How do you find your direction – learn to swim again?

Steve Jobs’s story is well-known. He co-founded Apple (which was Macintosh at the time) at the age of 21, becoming a millionaire within two short years. A few years after that, after having a disagreement with the company’s co-founder, the board decided to remove him from his position at Apple, essentially firing him from the company he helped create.

This led to a midlife crisis in which Jobs thought of all his other career options, which led him to create two more successful companies (NeXT and Pixar) before returning to Apple, which was floundering after he left. So even though he once found himself without a job, he was able to turn things around and lead Apple to its position as a leading global tech firm.

The main thing I learned during my time of trial was YOU DON’T HAVE TO MAKE THE FREAKING LEMONADE! You aren’t obliged to turn something bad into something good. So here’s my wisdom.

I was lost. I didn’t know what tomorrow would bring or how I would survive on my own, far away from my family, but I knew I needed “carry on”, if only for my children’s sake. There were times I didn’t feel like getting up or, dressing or talking to anyone – I felt sorry for myself.  But it’s okay to feel like that because it is important to grieve properly, and don’t let anyone else tell you the right way to grieve – it’s a very personal thing. In this stage I recognized, I needed to “get back on the horse” and take charge. And you will too!

# Acknowledge it happened and stop blaming.

Make peace with your situation so it doesn’t prevent you from reaching your goals and moving forward. I spent two years blaming God for what happened to my husband, questioning Him about what I’d done to deserve this “punishment”. But eventually I became reconciled to my situation although I didn’t forget or pretend it didn’t happen, I just accepted it and began to move on.

# Take action As my pastor says, it’s a lot easier to steer a moving vehicle than a parked car.

Taking action is a great way to move past a setback. So, I did, I went back to school and engaged in social events and I met a lot of nice people. So go out, meet with people, have plans, get moving, do SOMETHING.

# Give yourself time to process what happened. We all grieve differently – whether it’s the loss of a spouse, a job, or even a large contract.  People will try to help you and say what they think is helpful, but you are an individual, and they’re not in your position so they can’t necessarily help you.

#When life knocks you down, get back up. And when it knocks you down again, get back up again. The point is that you, too, can overcome whatever obstacles are in your way. And you can even find yourself in a better place. All you have to do is develop the right strategies. That’s how I’ve learned to overcome setbacks, defeats, and roadblocks, and….

Another business example is Mark Cuban, who worked at a bank when he was 22 and decided that he wanted to show his entrepreneurial side by sending “notes” to the CEO about how he could save the bank money, even taking it upon himself to write a company newsletter. Although he thought he was doing a good thing, Cuban’s boss didn’t quite feel the same, eventually calling him into his office asking him not-so-nicely who he thought he was.

Cuban ultimately left that job and moved in with friends, where he slept on the floor while working as a bartender. Sometime after that, he was hired by a PC software company, earning a good salary and commission–until he got fired.

But Cuban didn’t let that stop him, and now he owns Landmark Theatres, Magnolia Pictures, the Dallas Mavericks, and many other companies he’s partnered with through Shark Tank. All in all, his net worth is now over $3 billion.

When the bad happens, sometimes the last thing we want to do is make lemonade.

Sometimes it’s just bad, and complicated, and murky, and we have NO idea what to do.

At that point, we just need to sit with the bad. When we think we have to make lemonade and sweetness out of the suck, we just end up feeling more miserable.

So what if we just decide to sit with the suck?

And sometimes things don’t just suck — they’re plain shitty and painful and miserable. No amount of squeezing and straining them into a different form is going to help.

But sitting with the suck is not the same as wallowing in the suck.

Sitting with the suck means life gives you lemons, and you just decide you’re going to BE WITH the lemons.

But the anger or frustration or sadness or righteous indignation or despair you feel about the lemons won’t be constant. It will ebb and flow and change. You’ll know this because you’re sitting with the lemons.

You’re just going to STAY with your hurt and your pain, because the only way out is through.

And then one day you might think, “I suppose I could try to make lemonade…”

If you are catching lemons at full pelt, or sitting with lemons or just need a better lemonade recipe, give Jager Consulting a call on (440) 385-6737. We can help you with all of your lemon related issues.