Why We Are Where We Are Now

It was raining lightly as people gathered in Chicago to peacefully protest police brutality. The previous day the police had killed one person and caused injuries to several others, and in response agitators called for a demonstration. Even the democratic mayor of Chicago, who was present, declared that the event was a peaceful protest. But after the mayor and the majority of the other demonstrators left, things took a turn for the worse. A contingent of police arrived and demanded that the remaining demonstrators disperse. At that point, someone who has still not been identified, threw some sort of explosive device, and the police opened fire at random into the gathered crowds. 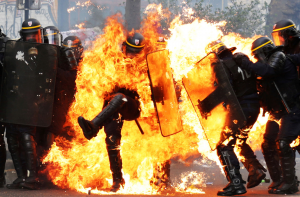 After the smoke cleared 7 police officers were dead, along with 8 protestors and as many as 60 civilians injured.

Some of the agitators were anarchists who operated a militant revolutionary force with an armed section that was equipped with explosives. Its strategy for revolution centered around the belief that successful operations against the police and the seizure of major industrial centers would result in massive public support by workers, start a revolution, destroy capitalism, and establish a socialist economy.

The event that evening created widespread hysteria, directed mainly at the anarchist organizers of the event, but the animosity also spilled over, with some directed at racial minorities in the community. Shortly after the deadly night, eight of the anarchist leaders were arrested and put on trial. All were found guilty and convicted of murder, although there were claims that the judge was biased, that the jury was stacked in the prosecutions favor and that much of the evidence had been fabricated.

Although this might sound very familiar, I’m guessing you’re wondering why you haven’t heard much about it in the media? The reason is that this event, called the Haymarket Affair, happened nearly 135 years ago, on May 4th 1886.

Following the Civil War, Chicago was a major industrial center employing tens of thousands of immigrants, most of whom were employed at about $1.50 a day. At the time American workers worked on average slightly over 60 hours, during a six-day work week. The city became a center for many attempts to organize labor’s demands for better working conditions. During the economic slowdown between 1882 and 1886, socialist and anarchist organizations were active, and Membership of the Knights of Labor, which rejected socialism and radicalism, but supported the 8-hour work day, grew from 70,000 in 1884 to over 700,000 by 1886.

In October of 1884, a convention held by the Federation of Organized Trades and Labor Unions unanimously set May 1, 1886, as the date by which the eight-hour work day would become standard. As the chosen date approached, U.S. labor unions prepared for a general strike in support of the eight-hour day, as employers were vehemently opposed to paying the same amount of wages for 50% less hours.

May 1st, or May Day, has been a public holiday in Europe for many years, and it was muted that the US should follow suit and celebrate Labor Day on 1st May, but President Grover Cleveland was concerned that celebrating Labor Day so close to the Anniversary of the Haymarket Affair in Chicago, and could be used as an excuse for anarchist and socialist groups to gather and remember their fallen comrades, possibly leading to more violence.

So, as you are grilling out today (or maybe not, because the weather doesn’t look so great), take time to remember what we are celebrating. The strength and depth of the American workforce on which this great country has been built. We also need to remember that if we do not learn from history, we are doomed to repeat it.

I pray that you and your family have a safe and Happy Holiday.