There are two extreme approaches to networking, one is to grab a stack of business cards and move from person to person, pushing those cards into their hands and moving on; the other is to hug the wall and wait for a familiar face, regressing into some nervous version of ourselves that hasn’t been seen surfaced since we attended our first mixers back in Junior High.

The most effective way to work a room is somewhere in the middle! You want to avoid falling into the trap of only talking to people you already have relationships with, but you also want to stick around long enough, when you introduce yourself, to dig in and find out more about that person, to show them that you’re genuinely interested in who THEY are and what THEY do.

With all that being said, we still want to make the best use of our time, to maximize the opportunities that are available to us, and not get stuck talking to the wrong people either.
One of the keys here is to be mindful of your own body language, as well as the non-verbal cues of others. If you are open to being approached, even while talking to another person, you want to make sure that your stance reflects that attitude. Keeping your shoulders apart, your arms uncrossed and resting by your side and with your body turned slightly away from the person you are speaking with, leaving room for another to join and participate.

Similarly, when looking for someone to initiate conversation with, be aware that those most likely to dominate the conversation and tune out what you have to say are those who avoid eye contact with you, often scanning the room to see whose company they may find more interesting or who they consider a more valuable interaction. 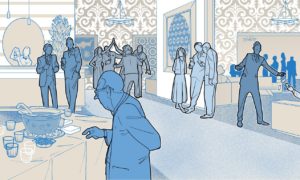 1. Body turned outward and a smile on the face?

An open invitation for conversation

2. Loud laughter from a group?

To break in to this group while they’re sharing a laugh would be an uphill battle.

3. Small talk coming from the bored-looking people standing in a U formation?

This is an opportunity to jump in and look like a hero when you liven up the conversation!

4. Stack of business cards in hand, moving from one handshake to the next?

More interested in selling then networking, go ahead and steer clear of this one.

5. The lone wolf, near the food or beverage table, looking out at the room with a smile?

They will truly appreciate the conversation!

While it’s common for influential people to drive the conversation, the best networkers make sure to leave plenty of room to hear what their conversation partners have to say. In fact, it’s a good idea to be prepared with a few questions you can ask to open someone up to talk about themselves and share with you. Open ended questions like “What do you love most about the work you do?” really allow people to speak with passion and excitement and lets you learn something meaningful about who they are.

Similarly, asking “what sort of connections would be most helpful for you, so I can keep an eye out while I’m out there in my world, networking with other people”. It’s not only a question they will enjoy answering, but it demonstrates your desire and willingness to help THEM out. It can also disarm people who are pre-conditioned to assume everyone wants something from them, when you take an active interest in what THEY need and want, in order to achieve THEIR goals.

Lastly, this is probably not the setting for political, religious or other “hot button” topics that can potentially derail the entire exchange and any possibility of future conversation!

So, come prepared with the steps above, and make sure you always follow up with a short email to everyone you met and had conversations with, to see if they are open to a one-on-one sit down, to continue that discussion in greater detail and keep the new relationship moving forward.